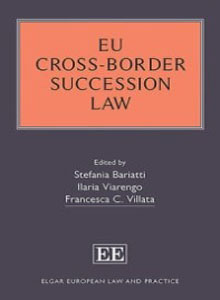 Practical analysis of the provisions of the EU Succession Regulation

Consideration of issues at the intersection between cross-border

Analysis of the specificities of the European Certificate of Succession and

its interface with national laws

and the opening and liquidation of a succession

Contextualization of the EU Succession Regulation in the framework of

the national law and practice of several EU Member States

A comprehensive study of EU cross-border succession law with global reach, this volume is an invaluable source of reference and guidance for practitioners specialising in estate planning, family law and property law, including judges,notaries, tax specialists and lawyers. Scholars of European succession law and conflict of laws will also find this volume’s critical analysis an instrumental tool in their research